SEPARATED and divorced fathers and mothers gathered at the Plaza de Cibeles in Madrid on Spanish Father’s Day (March 19) calling for a legal change to give preference to joint custody.

People at the rally, called by associations from across Spain, carried signs declaring “Not with Mum, not with Dad, with both of them,” “Joint custody now,” “No more orphans with living parents,” and “Don’t allow Dad to be deleted from childhood.” 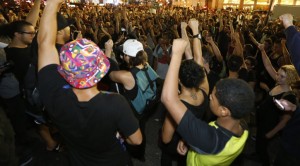 to one parent, which is still used in most Spanish courts.

“Children are born under joint custody then a judge comes along and leaves them fatherless for no apparent reason,” said Miguel Rodriguez from Custodia Paterna (Paternal Custody) association.

Maite Disdier, president of Segundas Mujeres e Hijos por la Igualdad (Second Wives and Children for Equality), said that the aim of the rally was to get politicians’ attention and stressed that step-families, like her own, should be allowed equal rights and relationships without the financial setbacks caused by high maintenance payments.

Disdier said she believed children have the right to joint custody: “Kids should be allowed to live and grow up with their dad and their mum.”